Rare Charles Darwin Letters to be sold at auction 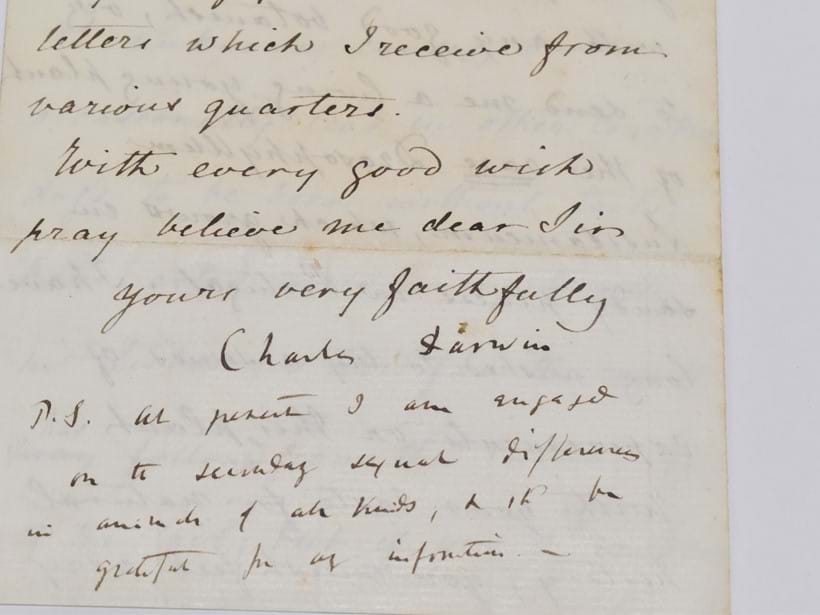 Four handwritten and signed letters from Shrewsbury born naturalist and biologist Charles Darwin are to be offered at auction by Adam Partridge Auctioneers & Valuers in Macclesfield.

The letters, all from 1868, include one written and signed by Darwin and three written by his wife Emma but believed to be signed by Darwin. The letters are written to William Caster Tait, a fellow British naturalist and author of ‘The Birds of Portugal’ published by Witherby in 1924. In the letters Darwin kindly asks for Tait to collect a specimen of Drossophyllum Lusitanicum (flycatching plant) from Portugal. Also, he discusses tailless dogs and the horns of Merino sheep, and mentions his paper on climbing plants and, in one letter, that he is not very well following a fall from his horse!

Senior Valuer and Auctioneer Aaron Dean, formerly of Trevanion & Dean auctioneers in Whitchurch, comments ‘it is a magical feeling holding a letter written by Charles Darwin, The Father of Evolution’. He continues ‘One pictures Darwin sitting at a table writing the letter, or dictating to Emma, with goodness knows what other correspondents, books, notes, ideas and specimens surrounding him’.

The letters have been entered into auction by descendants of William Caster Tait, one of four generations of Tait to have connections in Portugal. A nephew Mortimer C Tait translated sections of Luis Cameos 1572 work ‘Lusidas’ and another nephew, Alfred Tait, for recognition of his botanical work, was created Baron by King Carlos.

The four letters are being sold as one lot on Thursday November 18th at Adam Partridge Auctioneers & Valuers in Macclesfield and are expected to sell between £4,000 and £6,000. They are part of a larger auction of Fine Art, Boutique, Silver, Jewellery and Watches on sale between November 16th and 20th.

For more information, please contact Aaron Dean on 01625 431788 or on aarondean@adampartridge.co.uk